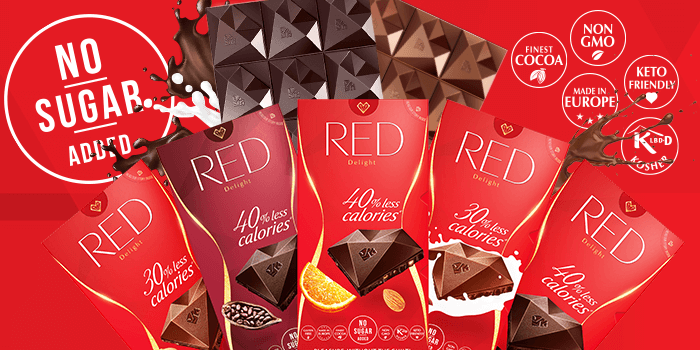 Posted at 17:33h in In the News by Megan Bailey 0 Comments
Spread the love

Through the ups and downs over the last year, one thing has remained certain. Our love for chocolate never goes away!

Case in point. RED Chocolate grew exponentially during the pandemic. In 2020, sales increased by 3,000%, an incredible feat when many businesses were suffering. They exceeded expectations in their first year by hitting store shelves in Rite Aid, Walmart, and giant grocery chains with their indulgent low-calorie chocolate.

And 2021 continues to look bright for the Master European Chocolatier as their better-for-you chocolate was in Sam’s Club earlier in the year, and will be found in Costco in December/January, making them one of the fastest-growing confectioneries in the industry. The company revenue is over $15 million.

“When we hit shelves in Q4 of 2019, we brought our expert chocolate-making skills to the U.S. and the reception has been overwhelmingly positive,” said Glenn Gardone, President and CEO. “It’s wonderful to see such enthusiasm for our reduced-calorie chocolate that eliminates refined sugar that is such a health risk when heavily consumed. RED offers a better and more flavorful alternative. Stay tuned for more limited-edition offerings that we’ll be releasing soon.”

According to IRI data, the healthier-choice/reduced sugar candy category is up 16.6%. To no surprise, RED has easily found a loyal following within the category, growing 10 times over the past year.

The first year, 2020, as the pandemic swept the nation, RED arrived in 3,000 stores. Since the start of 2021, RED is available in 10,000 stores across the U.S. The offerings include no added sugar, reduced calories, and less fat. The recipe deliciously makes the dark chocolate 40% less in calories and the milk chocolate 30% less compared to other popular chocolates on the market.

Ethically sourced and produced in a custom-designed environmentally-conscious facility, the full bars and grab-n-go come in classic dark, classic milk, and delicious flavors such as orange and almond. The diamond-shaped pralines are available in either a smooth nut or a coconut filling. RED is Weight Watchers-friendly, keto-friendly, gluten-free, kosher, palm oil-free, and non-GMO.

RED Chocolate is made with cocoa from the Ivory Coast of Africa, whose farmers select, roast, and grind the cocoa beans to perfection. The European brand is one of the first to masterfully use the natural sugar from the cocoa bean itself and naturally occurring sugars from fruits such as melons to lightly sweeten their recipe, receiving more than 10 invention patents in the process.

About RED Chocolate: RED Chocolate has come over from Europe and is taking the U.S. by storm. The chocolate brand was one of the highest performing products on their debut showing on the Home Shopping Network channel, nearly selling out of stock in a short ten minutes. RED Chocolate has also been featured on major outlets such as Life & Style, Spoon University, BuzzFeed, and many more. RED Chocolate is available in most major grocery chains, Amazon, and their own site, https://red-chocolate.com/. Follow the brand on Instagram @redchocolate.